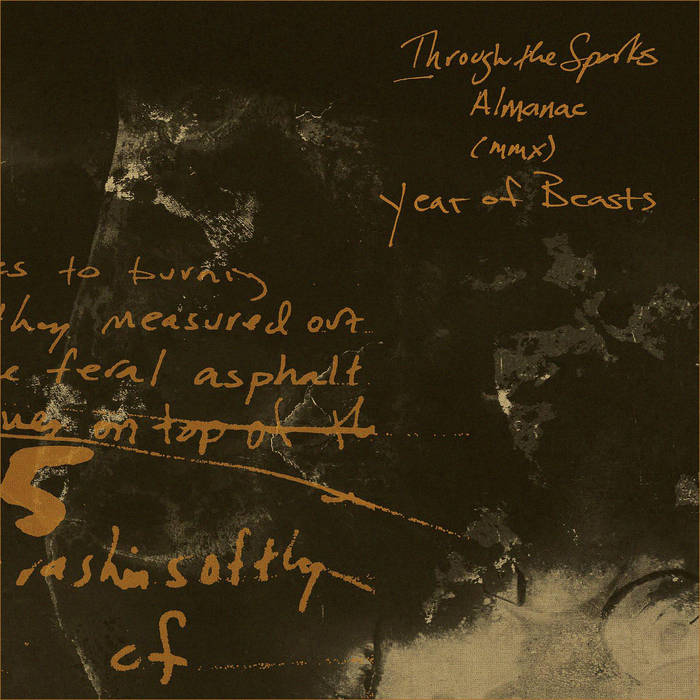 Almanac (MMX), Year of Beasts, is a collection of 12 singles released over the course of 2010, monthly, by Through the Sparks. It's a kind of transitional record to usher in the revitalized Through the Sparks. The "almanac" is arranged chronologically, sequenced from January through December, as the songs were released. While all the songs are fully-realized, it definitely gains size and momentum toward the end, as 12 songs start to serve a greater whole. Could've probably cut a few more tracks and edited out the ones that didn't fit. Could've put in some post-production segue tracks to give it some recurring themes. Could've re-sequenced it so that all the songs that are in 6/8 time don't all go together. But, that's making an album. That has restrictions. There is one of those in the works as well.

So, it jumps around. The songs try on different suits. No holds were barred. Yeah, there is a country ballad about a hobo hangout that hosts a Moog noise-scape. There is feigned Crowleanism tucked into a bossa nova about lawn care. There is a metaphorical contemplation on love, that runs from Cairo to a Goofy Golf Course in Panama City. Shaven primates. Fallopian tubes. It was a lot of fun to do.

After finishing its last full-length, Worm Moon Waning, the Alabama band saw two line-up changes. Drummer Thomas Mimikakis left for the West Coast, with Shawn Avery moving over to the kit. Avery had long-been a "sixth member" of the band, playing keys, guitar, percussion. Though, Mimikakis appears on a couple tracks here that had been started in the past.

Birmingham's Grey Watson moved in on guitar after that position had seen two other occupations. It's hard being the main guitar player in a band full of guitar players. Though a half-lifetime younger than some of the band, Watson actually attended the same shitty high school as most of the founding members; he was a perfect fit and brought with him a new excitement about the guitar. The electric guitar... It's no longer rare to see the the two-keyboard, one-guitar Through the Sparks mutate into a three-guitar cooperative on stage, when performing some of the songs included here.

Although each month may have seemed a "beast," with the band delivering a song each time while making another "proper" record, the band succeeds here in delivering a set of songs that, while they may not make an "album," they do celebrate the continuation of a group of musicians constantly striving to pin down what is sonically theirs. While all of these songs might not go together, they most certainly aren't going to fit on a release by anybody other than Through the Sparks. Almanac is a nice keyhole view of how all of this comes about and how the group endures and creates.

Produced, Recorded and mixed by Through the Sparks at Alamalibu, 2010: