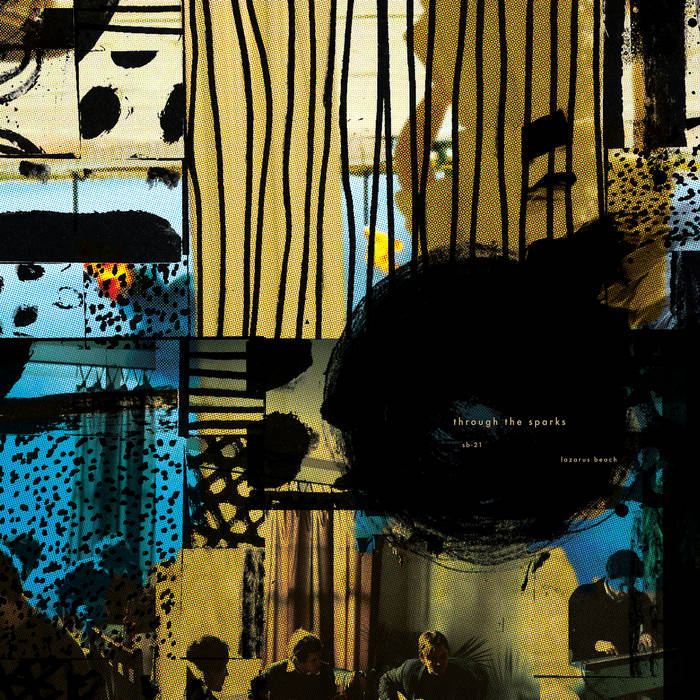 There’s nothing new about a garage band, conceptually-speaking, but each one holds the germ of something new. They can grow slowly like mildew but, in some cases, will burst fully formed like a busted water heater. Regardless, something will fester in those (often) suburban laboratories that will surely rattle unsuspecting neighbors via volume or subject matter. It’s an organic tradition that is inherently perverted and, in its own way, wholesome and pure.

On October 14, 2022, Skybucket Records will honor the 15th anniversary of Through the Sparks’ debut long-player, Lazarus Beach, with its first ever vinyl pressing. A M.O.R. baroque pop fever dream stewing in an irreverent nostalgia inspired by Steely Dan’s black humor, the clackity, tropical atmospherics of psychedelic Beach Boys, and the subversive anthems of Pulp, this new edition of Lazarus Beach is presented in its original sequence but with fresh mastering by Paul Logus (who’s resume features indie rock as well as classic albums by Public Enemy, Puff Daddy, and Anthrax) and “re-mixed” cover art by Roy Burns (4AD). It looks and sounds better than ever -- heightening the band’s eccentric, keyboard-forward compositions, soulful horn arrangements (courtesy of Chad Fisher of St. Paul and the Broken Bones), and singer Jody Nelson’s lyrical fascinations: suburban absurdity, the then looming burdens of adulthood, the American mythos, and a variety of paints and polymers -- all delivered with delightful turns of phrase, gleeful mysticism, hooks galore, and liberal doses of smoke, slapback, and gasoline. Not bad for an album recorded in a garage -- a clatter that Pitchfork even called “compelling”.

Lazarus Beach was a DIY labor of love. There was a Pro Tools rig. There were microphones that would do. Transducers hidden in pianos and old cars. A legion of antiquated keyboards… Recording with computers is, of course, commonplace now, but it was still something of an anomaly for an unknown band in the era of “Peak Indie” -- a time when guitars were still plentiful but embracing new collisions with hip hop and electronic music. The band took their time, obsessing over the compositions and recording -- giving themselves plenty of room to experiment and learn as they went along.

Bearing this in mind, Lazarus Beach is something of a throwback -- and it sounds even more like a privately pressed curio than it did fifteen years ago. The aforementioned keyboards are important: Nelson along with guitarists James Brangle and Nikolas Mimikakis, drummer Thomas Mimikakis, and bassist Greg Slamen are all formidable players and riff machines -- and they would really let those guitars rip on subsequent releases -- but the idea of wrestling with the physical limitations of busted Wurlitzers, Fender Rhodes, granny organs, and Mellotrons held a peculiar compositional appeal, especially in Birmingham’s rock-centric underground music scene. As such, songs like “L. Roi”, “Falling out of Favor with the Neighbors”, and “Local Moon” possess a fervent gallop -- like they were pounded out in a secret saloon (which, in a sense, they were). Elsewhere, “A Natural Machine”, “Archetype”, and both parts of “Action Figure Graveyard” have a wistful, stately swagger. But guitars still made it all happen: All of the gear was funded by the group’s rock-and-roll side hustle: A Rolling Stones cover band. Plus they ponied up money for the horns, so might as well give them the space to roam.

Through The Sparks would release two more albums and a slew of singles and EPs via several lineups -- -- but Lazarus Beach is a perfect entry into the band’s unique musical world-building: introducing themes and techniques they would continue to explore and expand upon to even more thrilling results, particularly on Worm Moon Waning and Alamalibu (the latter an EP named for the home studio where they would continue to record most of their output). Members would come and go, but Nelson continues to write and record new music (solo guitar and vocal recordings) from a new home studio hidden in another suburban locale. His sweet, subversive fever dream has yet to break.

Produced, recorded and engineered by Through the Sparks at Alamalibu Studios, 2006

Mixed by Through the Sparks, Wes McDonald and Keelan Parrish

Premastering to tape by J.M. Cifone

Mastered for vinyl by Paul Logus